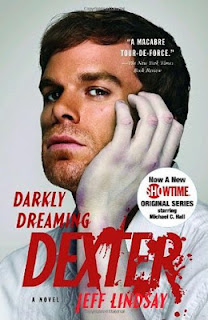 I really enjoyed the show Dexter of Showtime so I figured I should try the books. The first book follows a very similar plot to the first season of the show. I wouldn't have guessed the end if it weren't for the TV show. I thought the book was very well written. I'll try the rest of the series. I did listen to the audiobook. Nick Landrum read and I did not like him. I could hear him swallow constantly and he would confuse the voices sometimes.

The basic plot of Dexter is that he is a serial killer. After being adopted by a cop, Dexter's father, Harry, begins to notice strange things about Dexter. He is killing animals and seems to lack empathy. It doesn't take Harry long to learn that Dexter lacks something very important, feelings. Dexter isn't missing all feelings. He does feel loyalty to Harry and his adoptive sister Deborah and he does enjoy killing, but he lacks things like compassion, love, and respect. Seeing what is happening to his son, Harry tries a unique tactic: he teaches Dexter to kill without getting caught. But he gives Dexter a code so that he only kills bad guys. So Dexter is a serial killer vigilante.

Now, some of you may be wondering how anyone could possibly enjoy a book about a psycho serial killer, vigilante or not. The answer is rather simple.  This book was less about Dexter's kills and more about how Dexter attempts to function in a society he doesn't understand. Without emotions, there are many things Dexter simply doesn't understand. As the narrator, Dexter has a unique perspective on social functions. It is fascinating to me.

I do have one criticism to the books however. Deborah. She is mouthy like 20 sailors combined and more moody than a teenage girl. Every time she appears in the book, I root for her demise. Perhaps future books will help me see her purpose.
Posted by Unknown at 5:00 PM