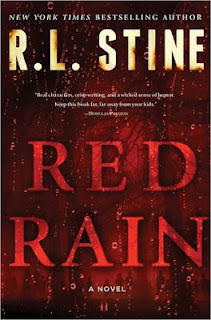 Oh boy, where to begin? I suppose at the beginning.....


As a young child, around 7 or 8, I was introduced to R. L. Stine with the Goosebump series. Like most kids my age, I fell in love. I read each and every book in the series. I had a difficult time putting them down once I started. I anticipated the release of each new book. I remember the waiting list at the school and public library being so long for each new release, that my mother would often buy them for me and my siblings (and my mother does NOT buy into fads so this was a big deal). I have fond memories of climbing into my tree-house and spending hours engrossed in a story. Once I got a little bit older (12-13), I moved on to the Fear Street series, which I also adored. After that I moved on to more and more books from different authors. I give a lot of credit to my love for reading to R. L. Stine, the man who made me love reading.

So when I found out he had written a book for adults, I HAD to read that book.  And that's where it all went down hill.

Red Rain is the tale of a woman who travels to a small island to witness a death ceremony for a travel blog, arriving just before a hurricane. The hurricane hits and the island is devastated. In the chaos and aftermath, she stumbles across 12-year-old twin boys who claim to have lost their family and home in the storm. The woman loves them so much, she decided then and there to adopt them and bring them home, despite her husband's protests.

Back at home we meet the woman's husband, the main character for this tale, and her two children. It doesn't take long to realize the two boys are pure evil and out to get rid of their new father and "rule the school".

The book was poorly written. The chapters seemed very haphazardly thrown together. The characters were wholly unlikable so I could have cared less what happened. There were giant plot holes that never seemed to be addressed. I wanted to pick up the novel and chuck it out the window, I hated it so much. I wanted to stop, but held out until the end, hoping against all odds he'd turn it around.  He didn't.

After I finished the novel, I felt cheated and robbed. All I could think was "Were his other books this bad? Is the childhood I hold so dear actually filled with terrible writing and ridiculously terrible stories? Was my childhood based on a lie??" I realize this may seem like an extreme, but it's like finding out your childhood hero was actually a sleezeball.

Usually I would say that I do not recommend this book, but with this one I will go one step further and say PLEASE DO NOT READ THIS BOOK.  It will destroy your childhood.

So you are probably wondering how this book got two stars?  That is simple. It was written by R.L. Stine, and even if this book was total crap, he is still the man who inspired me as a child and for that reason ALONE, he will always get some credit in my book.
Posted by Unknown at 5:00 PM