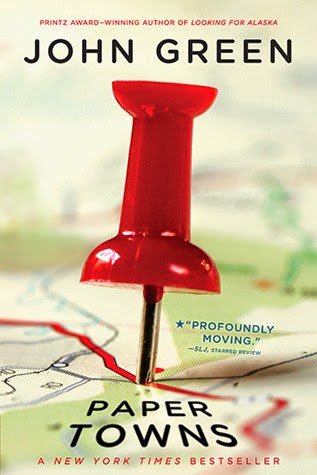 John Green is one of my favorite authors who happens to write books I don't really care about. I think he is funny and brilliant, but not necessarily in his books. I follow a lot of what he writes and says outside of his books, and can't get enough.  For that reason, I keep reading his books.

Paper Towns is a book about a nerdy boy and the popular girl next door he is in love with. They were friends as kids, but as they grew up, they stopped spending so much time together. One night, Margo (the popular girl) climbs into Q's (the nerdy boy) window and wants to sneak out with him to extract revenge upon those who have wronged her. After a night of adventure, Margo doesn't show up to school for a few days and Q sets off to find her.

As with Green's book Looking for Alaska, Paper Towns shows a boy who likes a girl based upon what he created in his mind, and not really the person. Q seems to miss that Margo came to him not out of unrequited love, but because he was close and had a car. He then spends most of his time and energy (and his friends' time and energy) in search of a girl who hadn't given him the time of day in years. I liked this because it's more realistic than most movies/books.

As with his other novels, my favorite character was a side character.  Radar was Q's best friend. Along with having a fun personality and being a loyal friend, Radar had to live with parent's who had the world's largest black Santa collection that they showed with pride. It was an awesome side character to put in a book and added an element of sarcasm and humor.

In the end, I thought the book was okay, but not great. It was boring in the middle and I hated both Margo and Q throughout the majority of the book. Once again, I am not sure if I am disappointed because the book wasn't that great, or if I built up anticipation because of the author. Read for yourself and tell me what you think.

Recommended for those who enjoy: coming of age stories, teenage love stories, and sarcasm.