The Land of Stories: The Wishing Spell: 2 Stars 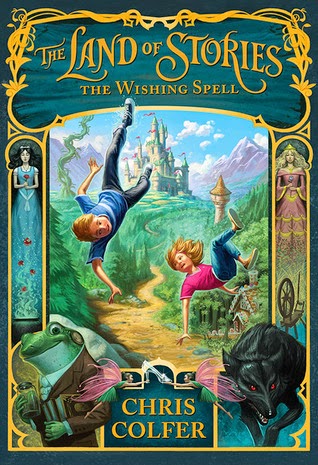 The Land of Stories: The Wishing Spell by Chris Colfer

You might know Chris Colfer from his role in the show Glee or you might not. At age 24, the young actor has only recently been brought into fame.  But that didn't stop him from publishing his own book series; a series he has been working on since childhood.

In The Wishing Spell, Alex and Conner are 12-year-old twins who recently lost their father. Each twin is dealing with the loss in their own way: Alex is reading and studying more, while Conner is becoming more outspoken and hanging out with his friends. Even though they are opposites, the twins are still close and both concerned for their mother who has had to work extra hard to make ends meet. Lucky for them, they also have a grandmother who watches out for them and even gives them gifts, such as The Land of Stories, a book that has been in the family for years. But they soon learn it's no ordinary book when the kids fall in and find themselves in a world of fairy tales.

The fact that Colfer started this as a young child is not surprising since it seems like it was written by one. The writing is weak, the characters are one-dimensional and generic, the plot is unimaginative (since it seems the be like a combination of many others), and the end result is boring.

The book contained several grammatical errors (I wish I had written a few down as examples, but I didn't).  Also, Colfer showed his inexperience and youth by immediately describing every character in detail when they were introduced. Most experienced writers find more creative ways to keep the story flowing and still describe the characters. Colfer had to stop progress in the story line to describe them. He also made the conversations in the book obnoxious by ending nearly every line with "said the character". By the time you were done reading the conversation, you were so sick and tired of hearing the word "said". These writing issues left the story choppy and were very distracting.

Both the main characters, Alex and Conner, were generic. There was the nose-stuck-in-a-book, teacher's pet, no friends, loner Alex.  And then there was the teacher's nightmare, snarky, popular, struggling in school Conner. The characters lacked any amount of depth. By the end of the book, neither character had grown or developed in any way. This made them a rather boring pair to read about.

The story itself left a lot to be desired. The story was essentially several other stories, just wrapped into one. There were elements of Inkspell, The Lion the Witch and the Wardrobe, as well as some elements from popular shows and movies. The story felt like a redundant tale and seemed to lack imagination.

At the end of the day, Colfer has written an excellent FIRST DRAFT of a book. I really wish he had taken the time and energy to go back and rework this story into something much better. I think if he were not famous, no one would have even heard of this book.

That being said, for being so young and having so many other things on his plate, Colfer shows a lot of promise as an aspiring writing. He will only get better with time and a much more persistent editor. I would be interested to see what he produces in 10 to 20 years.

Recommended for those who enjoy: fantasy, children's books and sarcasm.
Posted by Unknown at 6:00 AM