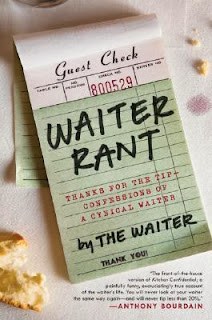 He didn't intend on becoming a waiter for most of his life.  It was a temporary job after becoming unemployed. But before he knew it, he had been a waiter for years. It wasn't all bad.  He was a waiter in high-end restaurants so he could get large tips and make out pretty well.  The downsides though, were many.  He made less than minimum wage so he depended upon tips, which weren't guaranteed.  And then there were the owners, other waiters, and patrons.  That's when he decided to start a blog. Often, "the waiter" (as he was known on the blog, preferring to stay anonymous), would write about his experiences.

While I enjoyed this book for the most part, it was hard for me to relate.  I have never waited tables.  Also, I have only lived in states that pay waiters and waitresses minimum wage, so they never depend on tips to get them by. Also, I am a pretty easy patron. I am nice and I always tip well (even if they did a terrible job). I also rarely ever go to high-end restaurants. Seriously, I think the only time I have actually been to high-end restaurants, if for company holiday dinners, and then we are off in a room by ourselves. I am a Red Robin, Outback Steakhouse, Applebees kind of girl. While I found the book entertaining, I could hardly relate to his experiences.

Also, the book came off a little whiny. I think its hard not to when you are primarily telling horror stories of your job. I think most of us can relate to that one. But after awhile, I felt like yelling "If you hate it that much, change jobs!"  Of course it's never that easy, but you know what I mean. The book is good, if you understand he is complaining through the entire thing.