An Unsuitable Job for A Woman: 2 Stars 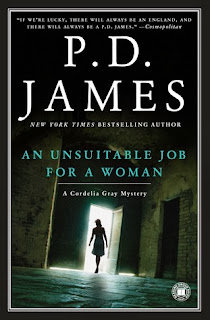 An Unsuitable Job for a Woman by P.D. James

I read this book because I needed a "U" book to read through the alphabet.  Its from the 70's but the plot sounded very interesting.

A young private eye becomes a partner at her less-than-popular private eye business, just in time for her partner to be diagnosed with cancer and commit suicide. She is left with everything, but as a young female, she is worried about her chances of success.

Shortly after her partner's death, one of his clients shows up looking for him. She convinces them of her abilities and for the first time ever, is working her very own case.

The case revolves a young man who died. His death was ruled a suicide but his father is convinced foul play was involved. He had recently quit college and moved out to a cottage on his own.  The detective moves into that very same cottage and begins to investigate.

The tale was frankly a little dry and boring.  Also, she seemed to luck into solving the crime more than anything.  I found the ending confusing, almost forced.

I was thoroughly disappointed in this one.
Posted by Unknown at 6:00 AM