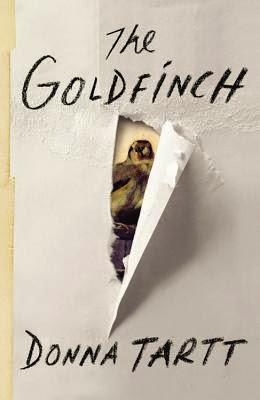 The Goldfinch by Donna Tartt

Theo Decker was 13-years-old when he was suspended from school. Since it was just him and his single mother, she took the day off for the meeting with his principle. While usually very close, that morning they were distant and he barely spoke. With time to spare and a rainstorm pouring down on them, they decided to stop into the Metropolitan Museum of Art to waste some time. And that changed everything.

There was a loud bang and Theo lost consciousness. He awoke to a scene from a movie. There was rubble, smoke, and bodies everywhere. His mom was in another room, so he couldn't find her.  But he did find the old man that was there with the cute young girl. He was awake and trying to talk to Theo. He hands Theo his ring with instructions and points off in the distance. Theo looks up to see The Goldfinch, the painting his mother loved more than anything. Confused that that was what the man was talking about, he feels that he must save it. After the man passes, Theo grabs the painting and leaves, heading home where he hopes he'll find his mother. But she will never make it.

Theo's life becomes a series of changes.  Every time he becomes accustom to where his life has ended up, it changes drastically and he is left to adjust without anyone there to lean on. Who he becomes, is a product of the tragedy that has surrounded him.

I chose this book because it was a Pulitzer Prize winner. The last couple that I have read have been disappointments, and when I saw that this one was nearly 800 pages, I was dreading it.  Even though I never read the synopsis or even had a clue about the plot, the idea of reading an 800-page book that might be dull or boring just made me want to nap!  But I finally bit the bullet at got it from the library. I am so glad that I was wrong.

The book drew me in almost immediately. The author goes above and beyond to describe everything Theo sees and feels so that you are know him well. You feel the love he had for his mother, who was an incredible person who gave up many of her dreams to make his life better and never regretted it. You feel his fear and heartache when she doesn't come home that night. You feel his fear when he realizes he stole a priceless painting. The character development was intense and wonderfully done.

The amazing thing about this novel is that I was never a big fan of Theo, but I was okay with that.  I never hated Theo by any means, but I was never fully on his side.  I think that was okay, because I think (and I may be way off base) that that was the author's intention. Theo's life was surrounded by horrific tragedy.  This made his life more difficult, but it was Theo's response to each and every tragedy that ultimately lead to all of his problems. While Theo was never one to come out and tell people his woes and bask in their pity, he supplied plenty of pity for himself. In his mind, he was always a victim, even years after the tragedy had passed. He used this as an excuse for all the bad things he did. There's a quote I once heard by Joyce Meyer that reminds me of Theo.  It says, "Being negative only makes a difficult journey more difficult. You may be given a cactus, but you don’t have to sit on it."  Theo was the king of sitting on the cactus. Then there was Pippa.

Pippa was the young girl who lost her father in the bombing, was orphaned by the explosion, and was severely injured. These were injuries that she would have to deal with the rest of her life. She then is shipped off to live with her aunt, who is cold and less-than-matronly, even though she'd rather live with Hobie, her dad's business partner. She ends up in a foreign boarding school for troubled girls, thanks to her minor brain injury. Her life was even more tragic than Theo's, but Pippa never let it be an excuse for her actions. Pippa made the best of each and every situation, even if they weren't great. She didn't let the tragedy that struck her dictate who she became. She hid her struggles well, rather than letting them consume her in a vat of self-pity. I think this is why Pippa is the shining beacon that Theo always looked to.

I decided to give this book only four stars because I thought the ending fell a bit flat. But you'll have to read it for yourself to see if you agree!

Rating: R (language and drug use)

Recommended for those you enjoy: great character development, coming of age stories, and moral dilemmas.
Posted by Unknown at 6:00 AM