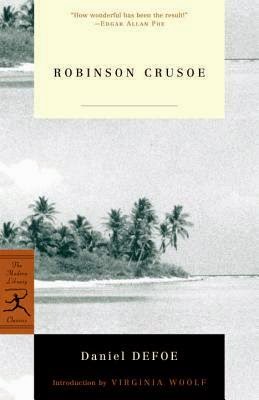 This is the ultimate child rebellion book. Robinson's parents want him to grow up, get an education, and become a lawyer.  Robinson wants to travel the world. In the 17th century, defying your parents and society wasn't as common or as easy as it is today. But Robinson did it. He boarded a ship and left his home without getting his parent's blessing.  Little did he know that the adventure he looked for, he would get tenfold.

After one shipwreck, you would think that Robinson would decide against heading to sea, but instead he heads right back out on another ship, only to be captured by pirates and enslaved. After escaping slavery, Robinson is able to get land and live in Brazil.  But his taste for the sea has not been satisfied still.

After years of living on his plantation, Robinson decides that it is time to set sail again, and this time, the result is far worse.  The ship wrecks and Robinson is stranded on a an island all alone.  Or at least he thinks he's alone. He eventually finds out that there others on the island as well, but not exactly the friendliest of people. They are cannibals.

Robinson ends up rescuing a man from the cannibals who doesn't speak English.  He names him Friday and thus begins one of the greatest bromances in all of literature. Robinson teaches Friday English and teaches him about Christianity.  They two grow close and end up saving more people from the cannibals. Eventually they escape the island and Robinson heads home, decades after he left.With his family long gone, Robinson moves back to his plantation in Brazil with his best friend.

This book was entertaining and funny.  I struggled quite a bit with how it was written. I felt like Defoe focused so much on the mundane details and not as much on the action a I would have liked. The reason for this had far more to do with the social practices of the time the book was written. The majority of these practices are dead, thus making the details of things (like the origins of the name Crusoe) very boring to read about. But, alas, this is one of the perils of reading literature that is hundreds of years old.

At the end of the day, the story is very entertaining and engaging.

Recommended for those who enjoy: action, adventure, pirates, and classics.