Something Wicked This Way Come: 4 Stars 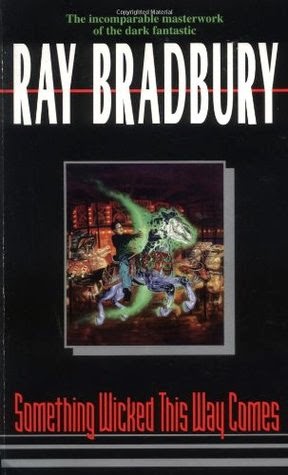 Something Wicked This Way Comes by Ray Bradbury

I have seen the Disney movie based on this book probably about a thousand times.  It was one of my favorites as a little kid. It was the scariest thing my parents would let me watch, so I watched it repeatedly (although it's not that scary). I thought that Jason Robards  and Jonathan Pryce did marvelous work in their roles in the film. I have held a fondness for the two ever since I was young.

School has just started and Jim Nightshade and Will Halloway (both on the verge of turning 14) have submitted themselves to a long and adventure-less Autumn, when they comes across a lightening salesman who warns of a big storm coming. Both boys race home, filled with anticipation.

The following day the boys are amazed to hear of a carnival coming to town (despite it being very late in the year) and they become somewhat obsessive.  But when strange things start to happen, the boys aren't sure what to think.  People are missing and there are new, young kids in town. Mr. Dark, the carnival's head honcho, is mysterious and sinister, covered in tattoos of faces. Now, Will must try and figure out what is happening before Jim trades everything to be older.

As is typical with Bradbury, this story has a not-so-subtle deeper meaning. What would you trade for eternal life?  To be young a beautiful again when those days have past, or older and able to be independent? Would you trade your soul, not realizing that the trade is far from even?

This is something we all probably think about (although not in this detail).  When you are young, you strive to be older, because life will be better than.  You'll be independent and have money. You can do what you want.  Or you miss the days when you were young and fit.  The days when boys turned their heads as you walked by.  I am definitely the latter. As I come to the point where I exit my 20's and enter my 30's, I am reminded more and more of what I have lost (and gained weight wise, ha ha ha).

While it's difficult to watch your youth disappear, its good to be reminded of what  you gain through age.  I am married, have a college education, am gainfully employed, take care of a sweet poochie, and have gained valuable life lessons over the years. While I no longer resemble the 20 year old I once was, I am happy with the nearly 30 year old I am. She is far wiser than the aforementioned.