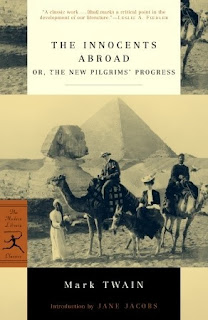 The Innocents Abroad by Mark Twain

I got this book a couple years ago because I really like Mark Twain and he has a second book called The Tramp Abroad. Both books are of his travels and are non-fiction. One was written closer to the beginning of his career, and the second was written about 11 years later. One of my favorite things about Mark Twain is that his sarcasm and bluntness got sharper as his life went on.  I thought the two of these books might show the change in my personality.  So I started with the first one.

This book accounts Twain's travels through Europe and the Holy Land. Now, this book was written before the Wright brothers figured out flying, so long before you could just go online, buy a plane ticket, reserve a hotel, and be there within a few hours. So, to get across the ocean, Twain had to go by boat. Once in Europe, he needed a guide and translator. He stayed in some sketchy hotels and traveled around via train and other things. This was very fascinating to me, considering our relative ease of travel these days.

Twain's wit and humor are not to be missed.  He routinely mocks the French while in Paris and notes the rather hilarious ways his guide tries to swindle him out of money. He is clever and witty in his descriptions of his various adventures.

On the downside, this book is a little like sitting and watching someone show you slides from their vacation. After awhile, it get rather old.