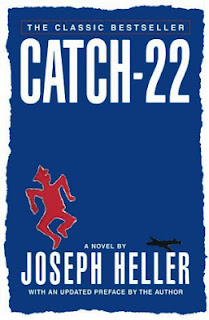 This book is probably the weirdest, funniest book I am not sure I completely followed. I have no idea how to categorized this book. It's war-based, but funny, yet serious and traumatic. It deals with everything from death, insubordination, mental health, cheating, prostitution, love, and more.

Taking place during WWII, the story mostly revolves around Yossarian, a young pilot who is tired of the war and wants to go home. Lucky for him, he only has to complete a certain number of missions to go home. Unluckily, his commander raises the number every time Yossarian gets close. So Yossarian decides to try to get send home for mental health reasons. The war will send you home if you tell them you are insane. But there's a catch...Catch-22. You must ask to be sent home because you are crazy, but if you are crazy, then you would never ask. By asking, you prove that you are not crazy. The problem is, if you want to complete the missions, you must be crazy because they are so dangerous.

Yossarian goes through so many people trying to find a way home. The entire time he has to deal with so many crazy people like Major Major Major Major, or crazy situations like the dead man who's his roommate that he can't get anyone to do anything about.

The story is great, but very complicated. Heller jumps from character to character and adds characters repeatedly. There is a long list of characters, making it difficult to keep track of who's who. He also jumps around in time, without much warning or explanation. He brings up things you have no knowledge of, but acts like you should know all about it. Then later he explains it. He will also tell you a joke you won't understand until he prefaces it five or six chapters later.

Did I enjoy the book? Yes, even if just for the unique, hilarious insanity Heller created.
Posted by Unknown at 5:00 PM