The Devil in the White City: 5 Stars 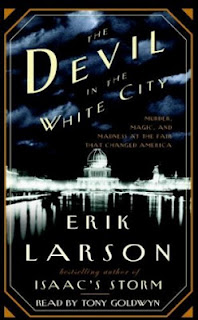 The Devil in the White City by Erik Larson

Originally I thought it was a historical fiction, but it's actually a nonfiction written as a narrative. If I had not read the category of this book online, I would have never believed it was nonfiction. The book is all about the events surrounding the 1893 Chicago World's Fair. Once again, my interest in serial killers was peaked with the tale of H.H. Holmes, a serial killer masquerading as a doctor. He showed up in a city where young girls would come out on their own for the first time, disappear, and there just weren't enough cops to look for them. He built a hotel and added some serial killer luxuries like gas chambers. He often told men that the hotel was full, saving room for the single women.

The book also tells of Burnham's challenge in creating and pulling off the Worlds Fair. During the time to prepare, his partner died, and many other things. The fair ended up being wildly successful and had several celebrity appearances including Wild Bill Cody and even Walt Disney's father.

I highly recommend this book.
Posted by Unknown at 5:00 PM