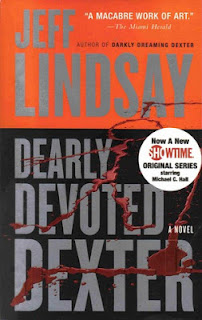 The second in the Dexter series brings us another enjoyable novel. Once again we join Dexter Morgan as he tires to keep his vigilante serial killer life a secret from the police. This is never easy when you work for the police department.

In this book, Dexter is up against the formidable enemy of Sergeant Doakes. Doakes, unlike everyone else in the Miami Police Department sees who Dexter really is behind his mask. Without emotions, Dexter is forced to fake his way through life. Unfortunately, Doakes isn't buying it. He decides to spend his every waking moment following Dexter, making it impossible for Dexter to kill anyone.

Lucky for Dexter,  Doakes past comes back to haunt him. While on the hunt of Dexter, the serial killer, he's being followed by a serial killer from his past. Now Dexter is faced with a choice: help Doakes catch the bad guy out to kill him, or let the bad guy take and kill Doakes, eliminating Dexter problem.


Once again, I enjoyed the narration of Dexter as he tries to navigate the world without basic human emotions. And once again I was annoyed by the edition of Deborah.

I would recommend this book to anyone who enjoyed the first one. A good follow up to a good book.
Posted by Unknown at 5:00 PM