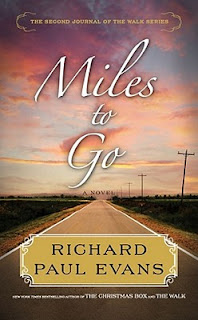 
I was first interested in reading this book when my sister, Tiffany had it marked "to read" on Goodreads.  Earlier in 2013, I had accepted a challenge to read 26 books, each beginning with a different letter in the alphabet.  I had yet to pick my "M" book and this book sounded interesting.  Having previously read some books by Richard Paul Evans, most recently The Sunflower, I was already a fan of his simple yet compelling style of writing.

After some research, I discovered that Miles to Go is actually a second book in a series.  I decided I was interested enough and read book one, The Walk, first.  A brief history of The Walk, to catch you up to Miles to Go:  Alan Christoffersen had it all, a beautiful wife (who was also his childhood best friend and sweetheart), a successful ad agency in Seattle, Washington, and a luxury house with luxury cars, until within a couple of months he had it all taken from him.  His wife dies after complications from a freak accident, his business partner steals all his clients and runs his business into the ground, and his house and cars are repossessed.  Feeling devastated and lost, Alan decides to walk away from it all, literally.  He picks the farthest point on the map (Key West, Florida) and decides to walk there.  The first leg of the trip is to make it from Seattle to Spokane, Washington.  Having spent most of my life living in Spokane, it was really fun to read about all the places he walks through, having been to most of them myself.  Mostly I found The Walk to be a book about hope that one can pick up the pieces of life and move on in the face of great loss.  Alan meets a lot of interesting characters along the way that help him in one way or another, some caring and generous, some not so much.  The Walk leaves Alan just outside Spokane city limits having been jumped, beaten and stabbed by a gang.

Miles to Go begins with Alan waking up in the hospital.  He discovers he's been stabbed 3 times and will take a long time recovering.  Since it is now October, and he's heading into mountainous territory, he knows he will be stuck in Spokane until the spring thaw when the passes are open.  Alan ends up staying with an being cared for by a young woman named Angel.  He met Angel in the first book when he stopped to help her change a flat tire before moving on in his walk.  After some time, it becomes clear that Alan needs to help Angel through some issues in her life more than he needs her to take care of him.  Throughout the book, they collect a group of friends, fellow lonely hearts, and together they help each other through different ups and downs.  To me, the book was really about how sometimes helping and caring for others, even when you are in a particularly low place, can take focus off your problems and make you feel better.

I really enjoyed reading the book as a Spokane local, since more than half of the book takes place in Spokane.  It struck me how well Richard Paul Evans must have done his research.  From the names of tiny coffee stands, to street names, to the feel of different neighborhoods, Mr. Evans hit the nail on the head.  I was pleasantly surprised at how happy I was to read about my hometown through the eyes of someone else.

The Walk Series is very easy to read and pretty upbeat despite the sad part of life the main character is in.  I thoroughly enjoyed the first two books, each one ending in a cliffhanger.  I can't wait to continue the journey with The Road to Grace.
Posted by Unknown at 5:00 PM